5 Things to Do on the Lake this Summer

Summer is here and there's nothing better than getting out on the water and enjoying some sunshine. The Lake of the Ozarks offers a variety of things to keep you busy all summer long! The best boat lift dealer at the Lake of the Ozarks has come up with 5 activities that you can enjoy on the lake this season: 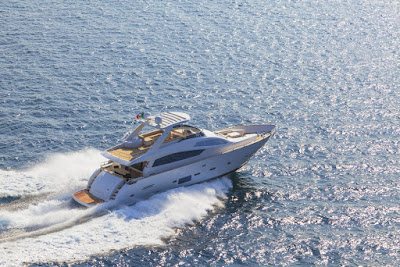 
The Lake of the Ozarks was voted the #1 Recreational Lake in the Country for a reason! The majority of people who vacation here year after year either bring a boat with them or rent one while they're here. Whether you're here with friends or here with family, boating is a great activity for everyone to enjoy.


If you're feeling adventurous, turn your day of boating into a day of tubing, skiing or wakeboarding. Nothing's better than feeling the wind and the water on your face as you fly behind the boat on a hot summer day! Watersports offer fun for people of all ages; you can also have a great time just watching someone being pulled behind the boat. 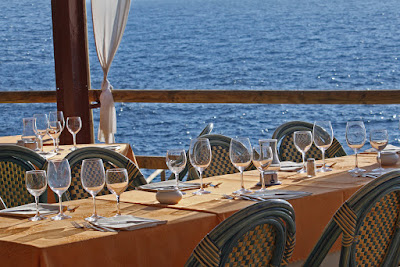 
There's no shortage of waterfront dining options at the Lake of the Ozarks. From Bagnell Dam out to the Niangua arm, you'll find a variety of different cuisines to enjoy for lunch or dinner while you're out on the water for the day. Don't forget to order yourself one of the signature Lake drinks too, like the Rum Runner, to help you cool off after a day in the sun!


The Lake area has something going on just about every weekend throughout the summer months. From live music at your favorite waterfront bars to fireworks over the water for the holidays, there's something for everyone to enjoy. Check out www.FunLake.com for details on upcoming events on the water!

If you don't already have a boat lift to keep your boat out of the water when not in use, we have you covered! Summerset Boats Lifts offers an assortment of both new and used lifts to meet your needs. In addition to our boat lifts sales, we service a variety of different brands of lifts. Give us a call at 573-348-5073 for all your Lake of the Ozarks boat lift needs!

The Origins of Father's Day

The nation's first "Father's Day" was proclaimed by the governor of the U.S. state of Washington on July 19, 1910. However, it did not become a nationwide holiday until 1972, 58 years after President Woodrow Wilson made Mother's Day official. In the spirit of Father's Day this weekend, Summerset Boat Lifts is here to give you a deeper look at the history of this holiday: 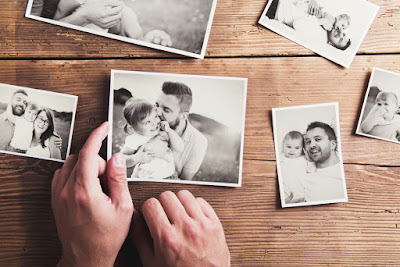 
In 1909, 45 states observed Mothers Day, and in 1914, President Woodrow Wilson approved a resolution that made the second Sunday in May a holiday in honor of “that tender, gentle army, the mothers of America.” The campaign to celebrate the nation's fathers however, did not come with the same enthusiasm. Some said that fathers don't have the same sentimental appeal that mothers do. On July 5, 1908, a West Virginia church sponsored the nation's first event dedicated solely to fathers. A Sunday sermon was held in memory of the 362 men who had died in an explosion at the Fairmont Coal Company mines. However, this event was a one-time thing and not an annual occurrence.

The following year, a Washington woman named Sonora Smart Dodd, one of six children raised by a widower, tried to establish an official equivalent to Mother's Day for male parents. She went around to local establishments to drum up support for her idea, and on July 19, 1910, Washington state celebrated its first Father's Day. Slowly the holiday spread, but some men continued to disdain the day. 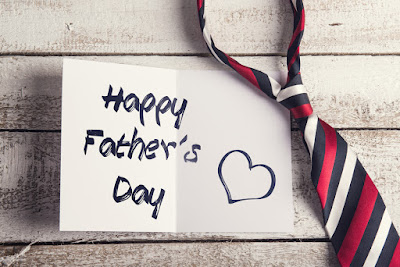 
During the 1920s-1930s, a movement arose to scrap both Mother's Day and Father's Day in favor of a "Parent's Day." Activists stated that both parents should be loved and respected together. However, the depression derailed the effort. Struggling retailers and advertisers doubled their efforts to make Father's Day like a second Christmas for men, promoting gift sales. When World War 2 began, advertisers argued that celebrating Father's Day was a way to honor American troops and support the war effort. While Father's Day may not have been a federal holiday by the end of the war, it was a national institution. In 1972, in the middle of a hard-fought presidential re-election campaign, Richard Nixon signed a proclamation making Father’s Day a federal holiday at last.

Today, economists estimate that Americans spend more than $1 billion each year on Father’s Day gifts. What about you? Have you purchased a gift for the father figure in your life yet? Father's Day is this Sunday and  your favorite Lake of the Ozarks boat lift company wishes all the dads out there a wonderful weekend!

Small Boat, Big Boat, Short Boat, Long Boat - We've Got a Lift for Them All!

Lake of the Ozarks is well-known as a premier vacation destination in the Midwest. People from across the country come here for great entertainment, dining, shopping, and especially, boating! In addition to vacationers, the Lake area is filled with second homeowners. Chances are if you own a house at the Lake, you also have a boat dock, and that dock is going to need a Lake of the Ozarks boat lift! Lucky for you, Summerset Boat Lifts has a great selection of both new and preowned boat lifts to fit your needs! 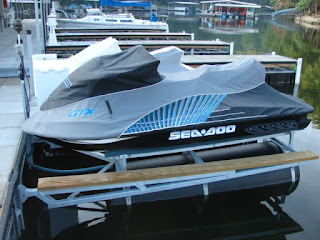 
Our 24,000 lb lift is available in 8-arm and 10-arm mechanisms. A 4-tank system, this lift offers a superb weight to width ratio in stability for your boat! Have a bigger boat than that? We can build a custom lift just for you! Your exquisite taste demands the best in boat lifts - and that's the Galva-Hoist from Summerset Boat Lifts! 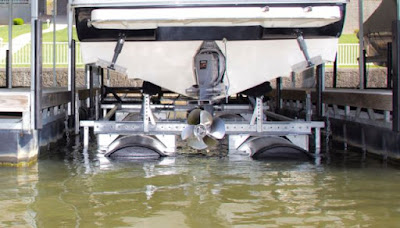 
Our 6,500 lb lift is an ideal capacity for almost every tritoon on Lake of the Ozarks. The mechanism and structure of the lift are well suited for the rough waters that our lake has to offer. From a 24 ft. deck boat to a 27 ft. tritoon with a 300hp outboard, give serious consideration to our 6,500 lb boat lift! Our 8,000lb boat lifts are unique to the industry in that the structure has c-channel on the bottom of the tanks, dispensing the weight of the boat across many more load points than the competition. Our 10,000 lb lift offers the same structure, making it a great bang for your buck, and the opportunity to grow into a bigger boat utilizing the same lift later on.


Our 17,000 lb lift is capable of lifting many of the 34 and 35 ft. day cruisers and is "best in class." Our 20,000 lb lift is an 8-arm mechanism ideally suited for many 37 to 41 foot day cruisers. The four structures on the top of the lift are duplicated below the tanks to create a rigid box that will dissipate the weight of the boat over many points on the lift and dock.

No matter your needs, Summerset Boat Lifts is here for you! Our boat lift sales are complimented by the servicing of many different brands of lifts. Give us a call at 573-348-50703 for more information. We're here to make certain you and your boat get the very best level of product and service at The Lake!

Summerset Boat Lifts is Gearing Up for Lake Race 2016

Lake Race is back, and Summerset Boat Lifts is ready for another great year of powerboat racing! From the new festival of speed to the fun run on Sunday, the rest of this week is filled with festivities for the entire family to enjoy! Check out the event details here and we'll see you there! 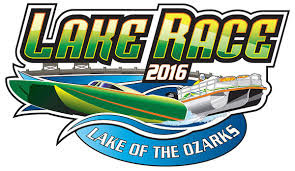 Enjoy viewing fast cars, boats, motorcycles and more as they line up on Osage Beach Parkway West of the Grand Glaize Bridge. There will also be food booths and other vendors, along with music and entertainment from 4-9 PM.


Race fans will experience everything unique about Lake Race during the street party on the Historic Bagnell Dam Strip. Meet the drivers and get up close and personal with the race boats from 4-11 PM. There will also be live entertainment and a Kid's Zone! 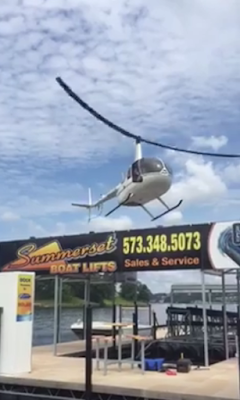 
Opening ceremony will take place at 10:40 AM at Beavers at the Dam. Powerboat Racing commences at 11 AM. There will be unlimited public viewing at Beavers on the Historic Bagnell Dam Strip and at numerous other locations surrounding the course. All heats should be complete around 5 PM. When the races are over, stick around to cheer on the drivers during the awards ceremony at 7 PM. Entertainment will be available at various spots along the Strip from 6-11 PM for the after party!


Sunday morning continue the fun with the Lake Race 5K Walk or Run. The race will start at Beavers at the Dam at 9 AM and an awards ceremony will follow on the upper patio at Beavers. Starting at 10 AM, grab your boat and head to Beavers for the Lake Race Props and Hoses Fun Run! The event starts at Beavers and ends at Redhead Yacht Club, with various stops in between. Raffle tickets for a 50/50 drawing will be available for $20 at each participating location.

Be sure to look for our dock with helicopter pad while you're out watching the races! For all your Lake of the Ozarks boat lift needs, give us a call at 573-348-5073. From small PWC lifts up to custom lifts like the one we'll have at Lake Race this weekend, Summerset Boat Lifts has something for any boat and any dock type.