New Year's Eve is one of America's favorite celebrations.  Not only is it a chance to throw lavish parties, but the holiday brings hope for a more prosperous and happy 365 days. In today's blog, Summerset Boat Lifts offers a few fun facts about New Year's Eve. 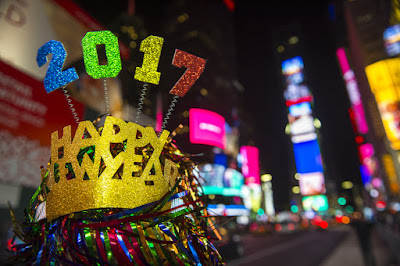 
1. Each New Year's Eve, 1 million people gather in New York City's Times Square to watch the famous ball drop. Close to 1 billion people around the world watch it on TV.

2. The Time Square Ball was first dropped in 1907 after there was a fireworks ban. Back then, the ball was made of iron and wood, was lit with 25-watt bulbs and weighed 700 pounds.

5.  Approximately, 2,000 pounds of confetti is dropped on the crowd in Times Square at midnight.

6. Approximately 22% of people admit to falling asleep before midnight on New Year's Eve.

7. Approximately 44% of American adults plan to kiss someone at the stroke of midnight on New Year's Eve.

8. It's tradition to ring in the New Year with family and friends because it's said that the first people you see will either bring you good luck or bad luck (so keep your foes away).

9. The tradition of setting off firecrackers and other noise makers at midnight on New Year's Eve started to scare away any remaining evil spirits and to ensure a brand new start.

10. Many people celebrate the new year by popping open a bottle of bubbly. Each holiday season, Americans consume close to 360 million glasses of sparkling wine. 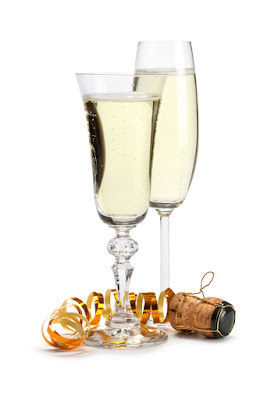 11. About 45% of American's make New Year's resolutions, but about 25% of those people give them up by the second week of January. The most popular resolutions include losing weight, getting organized, spending less and saving more, staying fit and healthy and quitting smoking.

12. Auld Lang Syne, meaning "times gone by," is a song traditionally sung at the end of New Year's parties. While most people don't know the words to the song, the overall message is that people have to remember their loved ones, dead or alive, and keep them close to their hearts.

13.  Many people across the United States will eat black-eyed peas on New Year's Day for good luck throughout the coming year. Be sure to also eat leafy greens, as the more you eat, the more prosperity you'll experience.

14. If you want to have a Happy New Year, don't eat lobster or chicken. Lobsters can move backward and chickens can scratch in reverse, so it is thought these foods could bring a reversal of fortune.

15. The first recorded New Year's celebration dates back 4,000 years to Babylon, when the first moon after the spring equinox marked the new year. In 46 B.C., Julius Caesar created a calendar with January 1 as the first day of the year.

16. The month of January is named after Janus, the god with two faces, one looking forward and one looking backward. He is the god of beginnings, transitions, gates, doors, passages and endings.

17.  The top three most visited destinations in the United States to travel to for New Year's Eve are New York City, Las Vegas and Walt Disney World. Globally, Sydney, Australia is the destination of choice, as you can see over 80,000 fireworks go off over the famed Sydney Opera House.

Summerset Boat Lifts hopes you have a Happy New Year! We can't wait to help you with all your Lake of the Ozarks boat lift needs in 2017. Whether you're in need of a new lift or boat lift service, you can trust Summerset! Just give us a call at 573-348-5073.

Summerset Boat Lifts
1165 Jeffries Road Osage Beach, MO  65065
573-348-5073
Email:info@summersetboatlifts.com
Keep up with local news, events and product information by Following us!!
Like Our Facebook Page
Connect with us on LinkedIn
Follow Us on Google+
Posted by Summerset Boat Lifts at 8:38 AM No comments:

With Christmas just two weeks away, now is the time to get shopping. Summerset Boat Lifts is here to help you shop for all the boat lovers in your life. We have a variety of boating accessories available at our boat lift company at the Lake of the Ozarks. From ski ropes and life jackets to dock lockers and lift remotes, we've got something for everyone to enjoy during boating season at the Lake! 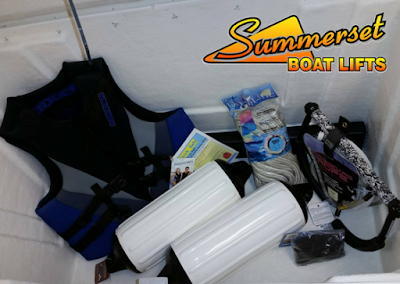 
While life jackets may not seem like the most "fun" gift, they are required. In order to have fun on the water, it's important to have life jackets for every passenger on the boat. Pick up your new life jackets from your premier Lake of the Ozarks boat lift company.


One of the last things you need is for your boat to get damaged, causing it to go in the shop and delay the use of your boat for possibly weeks. Protect your boat, and your dock, with our dock bumpers!


Keep your boat securely tied up to the dock with a trusty rope! Summerset Boat Lifts has a variety of ropes for all your boating needs.


Whether you're an avid skier or looking to try something new next summer, we've got your ski ropes and wake board ropes!


Give the gift of storage with a dock locker. Maybe you already have all the accessories you need for a fun day out on the water, but do you have to drag them back up to the garage each time you take the boat out. By investing in a dock locker, you're able to safely and securely store all your favorite accessories right there on your dock! 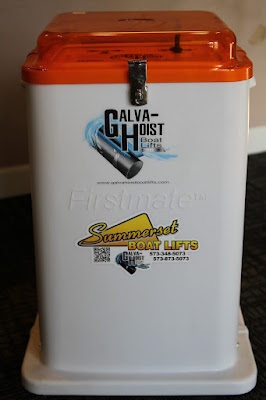 
Firstmate offers a fast, safe and reliable way to control your boat lift remotely. Using their remote controlled systems gives you an extra set of hands from inside the boat, for getting your boat on or off the lift. Get your remote control from Summerset Boat Lifts today!


One boating accessory that you won't have to wait until summer to use is a de-icer. The last thing a boat lover wants is for something like damage to their dock to delay boating when spring rolls around. Protect your boat dock and lift from the icy water this winter by investing in a device that moves water around to prevent the formation of ice near your dock.

For all things boating, you can trust Summerset Boat Lifts! We offer a variety of accessories to supplement your boat, boat lift and dock. In addition to our new and use boat lift sales, we offer the best boat lift service at the Lake of the Ozarks. We're lifting your dreams, from canoes to cruisers!

Summerset Boat Lifts
1165 Jeffries Road Osage Beach, MO  65065
573-348-5073
Email:info@summersetboatlifts.com
Keep up with local news, events and product information by Following us!!
Like Our Facebook Page
Connect with us on LinkedIn
Follow Us on Google+
Posted by Summerset Boat Lifts at 6:28 AM No comments:

Benefits of Investing in a Kasco De-Icer

While it wasn't much, the Lake of the Ozarks area experienced its first snow this week. Temperatures are below freezing and that means lake conditions are worsening. In last week's blog, we discussed the possibility of ice damage to your dock and lift, and how a de-icer can help. Today, Summerset Boat Lifts offers more information on our Kasco De-Icers. 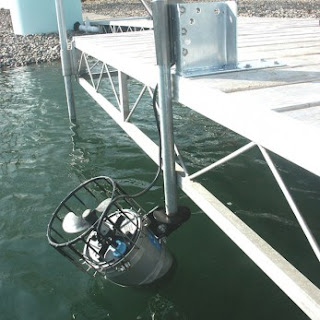 
Boat and dock owners can rest assured their dock will be protected this winter when they invest in a Kasco-De-Icer. These products will help prevent ice damage, saving you time, money and headaches. Kasco products are designed to be cost effective and energy efficient, giving you the edge in performance, reliability and ease of use. Kasco De-Icers are the standard by which all other de-icers are measured. The original product was introduced more than 45 years ago. They are used all around the world and continue to provide the best performance in ice prevention and property protection.


No one has more experience in de-icing than Kasco. Originally developed to allow in-water boat storage in areas subject to freezing waters, the de-icer is now used in a multitude of applications. By moving large volumes of warm, bottom water to the surface, Kasco De-Icers eliminate and prevent ice formation around boats, docks, lifts and other property you need protected from damaging ice formation. This creates an ice-free zone around your dock, successfully preventing damage from ice jacking and expansion. Kasco's unique design provides superior flow and excellent energy efficiency to solve your de-icing needs in a cost effective manner.


Kasco Marine is a leader in the design and production of pond aerators and circulators, floating decorative fountains, beneficial bacteria, pond and lake dye, and de-icing equipment. It all started in 1968 when an inventive marina operator in Minnesota introduced the world's first de-icer. The revolutionary equipment protected marina equipment from the harsh winter conditions and even allowed for in-water boat storage. Kasco was formed to bring this new product to markets across the country. The company grew quickly and by the 1980s, Kasco dominated the de-icing market.

Get your Kasco De-Icer from your premier boat lift company at the Lake of the Ozarks! We're here to help make sure your lift and dock make it through the winter season in tip-top shape. Summerset Boat Lifts is here for all your boat lift and boat lift accessories needs. Give us a call at 573-348-50703!

Summerset Boat Lifts
1165 Jeffries Road Osage Beach, MO  65065
573-348-5073
Email:info@summersetboatlifts.com
Keep up with local news, events and product information by Following us!!
Like Our Facebook Page
Connect with us on LinkedIn
Follow Us on Google+
Posted by Summerset Boat Lifts at 9:34 AM No comments:

Prevent Ice Damage to Your Dock and Lift This Winter


Ice heaves can occur in bodies of water of all sizes. It's very easy for ice to damage a dock. The freezing water expands, melts, refreezes and expands again causing enough pressure to damage anything still sitting in the water. Large ice chunks floating in the lake can also move with the current, hit your structure with great force and even get stuck and start to build up. To put it in perspective, sometimes ice heaves are powerful enough to move trees. More commonly though, the ice damages docks, lifts and retaining walls. Your dock and your lift are both susceptible to ice damage. When a dock freezes, it becomes less flexible and does not move with the water as the levels reduce. This causes structural stress that can lead to joint breaks and twisted boat lifts. 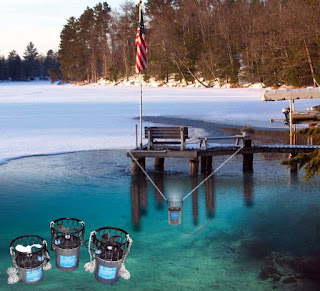 Consider Investing in a De-Icer


One of the best and easiest ways to protect your dock and lift from ice damage is to purchase a de-icer. The primary function of a de-icer is to protect your boat dock and lift from icy waters. It's your best defense against costly damage to property due to ice formation and expansion. By creating water movement, a de-icer keeps the water around your dock from freezing. Thus, reducing the likelihood of damage to your boat dock and boat lift at the Lake of the Ozarks this winter season. In addition to the de-icer, you should have a professional come check your lift to add antifreeze to the hoses. If you can prevent the lake water around your dock and lift from freezing, you'll be able to avoid the majority of damage caused by winter weather.

Summerset Boat Lifts is here to help you ensure your lift makes it through the winter season. We offer de-icers, as well as other accessories that are essential to the boating lifestyle. If you haven't already had your lift checked out since the end of the summer season, give us a call at 573-348-5073 to come out and take a look at it. We'll be able to make sure everything is in tip-top shape to make it through the winter so you're ready to roll next spring!

Summerset Boat Lifts
1165 Jeffries Road Osage Beach, MO  65065
573-348-5073
Email:info@summersetboatlifts.com
Keep up with local news, events and product information by Following us!!
Like Our Facebook Page
Connect with us on LinkedIn
Follow Us on Google+
Posted by Summerset Boat Lifts at 10:39 AM No comments: